As the area’s first “smart park,” Riverfront Park is the first park in the region to provide solar-powered lighting, free public Wi-Fi, flood sensors and security cameras. The Wi-Fi service enables visitors to access the Internet through their own wireless-enabled devices.

In 2018, Fredericksburg was the very first community to collaborate with the Virginia Innovation Partnership Corporation (VIPC) Smart Communities initiatives.  Thanks to the city’s partnership and a $75,000 grant from VIPC, more expansive plans for Riverfront Park were integrated into the park design with smart technology which will be implemented in phases.

“It’s exciting to see the early vision come to life in such a great community space that incorporates some of the latest Internet of Things and public Wi-Fi technologies as part of the community place-making activity,” said Dave Ihrie, chief technology officer and vice president of strategic initiatives for VIPC. “We look forward to continued collaboration with Fredericksburg as a leading innovation partner.”

Designed to be a hub for downtown events and culture, Riverfront Park was the natural home base for the mother otter sculpture in Fredericksburg Main Street’s Otter-ly Amazing Trail. This exciting partnership between the downtown business community and the City of Fredericksburg seeks to promote the precious Rappahannock River ecosystem and the city’s rich arts community through an interactive art experience in historic downtown.

"We look forward to the public ‘hunting’ for the bronze river otters downtown and enjoying all the wonderful restaurants, coffee shops and retail opportunities along the way," said April Peterson, lead on the Otter-ly Amazing Fredericksburg Project. "The otter will now proudly serve as a symbol of the health and vitality of our city, and each otter sculpture will inform residents and tourists about the attributes of beautiful Downtown Fredericksburg."

The public is invited to participate! Find out more online at: www.fxbgotters.com. 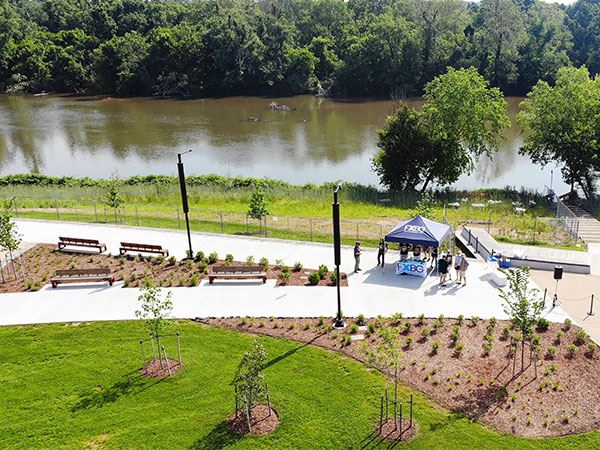 Preparing for the future while honoring the past

Riverfront Park is located across the street from the city’s public parking garage, where abundant parking is available and is free for the first three hours. Restrooms are being planned for the park, but for now a public restroom is 440 feet away at the visitor center at 706 Caroline Street.

Riverfront Park is also prepared for future improvements. The City of Fredericksburg has received a $1.2 million federal grant from the U.S. Department of Commerce to help construct a performance stage and restrooms. Riverfront Park was designed with a future stage and restrooms in mind and the plumbing and electrical connections are already in place where the stage and restrooms will be installed, pending new FEMA map updates expected next year. The park will be a central hub for pedestrian activity as Fredericksburg continues to pursue trail development and eventually link Motts Run Reservoir to Dixon Park.

The park’s signage will work to interpret and share the city’s rich history with new audiences. Six different archaeological investigations were conducted in the park area prior to construction. These revealed a rich history of activity in the area spanning from the prehistoric Native American presence through the Civil War to becoming a community hub in the 20th century. Construction at the park was carefully designed to leave some of the most significant findings intact, below the ground.

Turning the dream into reality

The park is a collaborative work to bring to life a vision which was outlined three decades ago. The City Council appointed the Riverfront Park Task Force, which labored through much of the past decade to bring ideas and budget estimates to the community. The Mayor and City Council identified the Riverfront Park as Priority #7 in their 2036 Vision work – which was created in 2016 – and directed staff to build the park in 2017. Design and engineering work concluded in 2018 and the project was put to bid for construction in 2019.

The park would not have been possible without the dedication of many citizen volunteers including the Riverfront Park Task Force and our Face the River friends. The City also thanks the many service providers who helped design and build this park, including but not limited to: Rhodeside and Harwell, Athena Construction Group, Downey and Scott, Dovetail Cultural Resources Group, Mutualink, Integrated Security Technologies and Tree Fredericksburg.

The city investment in Riverfront Park is a fraction of the more than $40 million in public investment – more than half of which went to the Commonwealth’s Chatham Bridge project – in the past decade in downtown with trails, colonial lights, brick pavers, small area plans, the public parking garage and more. These investments are meant to create sustainability for our business community as companies increasingly upgrade properties and create jobs in Downtown Fredericksburg.

The City of Fredericksburg initiated efforts to design and construct the new Riverfront Park, which is a significant public space in Downtown Fredericksburg. For a detailed history of the project please see the timeline below and see this page: PROJECT DOCUMENTS.

The City of Fredericksburg is extremely grateful to the huge cast of city staff, volunteers, community organizations, businesses and government support needed to bring Riverfront Park to fruition. Special thanks to all who were involved! 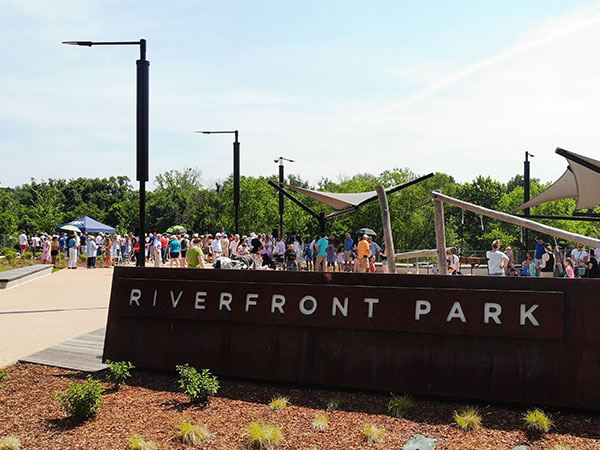