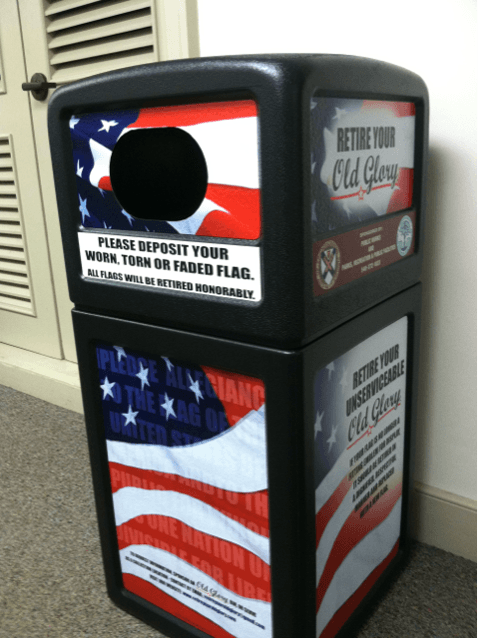 "The Flag, when it is in such condition that it is no longer a fitting emblem of display, should be destroyed in a dignified way, preferably by burning." ~ United States Flag Code (4 USC Sec 8 Para (k) Amended 7 July 1976)

Since August, 2013, the City of Fredericksburg has been offering "Retire your Old Glory" as a service to area businesses and residents. Two departments, Public Works and Parks, Recreation and Special Events, accept unserviceable American and Virginia flags for proper retirement.

"Retire Your Old Glory" is a Pennsylvania-based organization dedicated to the proper retirement of American flags. And fredericksburg is the first Virginia locality to participate in the program. City staff became aware of the program when a member of the staff was visiting family in the Pittsburgh area and read an article in a local newspaper about the program. As of November 10, 2019 there were 31,575 flags collected and respectfully retired in the national program.

Fredericksburg's Participation in the Program

The collection bins are available whenever City Hall or the Dorothy Hart Community Center are open for business. Anyone may use this service; you do not have to be a resident of the City. There is no cost.