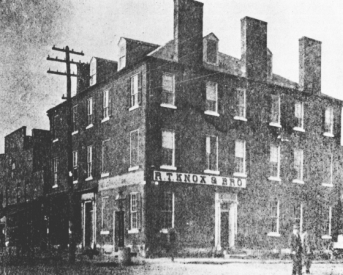 The corner of William and Charles Streets, in front of the former Planter's Hotel, is documented in advertisements and records as the site of at least twelve separate auctions of enslaved persons between 1847 and 1862. The shaped block of stone at the corner is closely associated with these events, and symbolizes Fredericksburg's long engagement in the transatlantic slave trade. Though perhaps initially installed as a horse-mounting block, the stone's association with the auction of enslaved persons is supported both by the documentary evidence and by oral tradition, including firsthand accounts from former slaves Albert Crutchfield and George Washington Triplett, as well as other Fredericksburg citizens. Regardless of its original purpose, the block is undeniably a feature of this streetscape that witnessed these sales.

Removal of the stone was first considered by the City Council in 1924, when the local Chamber of Commerce rebutted the block's use for slave auctions and argued that its continued presence reflected poorly on the community. Local auctioneer 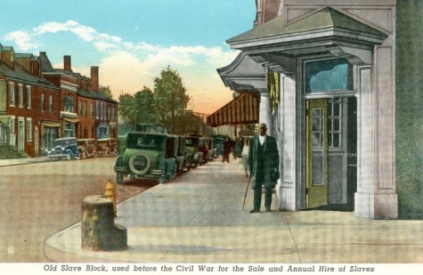 N.B. Kinsey produced newspaper advertisements and other evidence in response proving the stone's association, and the matter was dropped for a time. Historians S.J. Quinn and John Goolrick, Jr. each addressed slave auctions at the site in their respective works, and in 1903, James T. Knox notated a picture of George Washington Triplett, describing him as the last man "sold on the slave rock." Crutchfield is pictured on a 1920s postcard standing near the block, and his 1931 obituary states that he recalled his sale on the block "distinctly." Indisputably, the block is an urban artifact and a witness to these aspects of Fredericksburg's history which are difficult to confront.