This journey that brought the City of Fredericksburg to the united decision to relocate the Slave Auction block included nearly three years of intense discussions, public forums, and listening to the many views of those in our community. 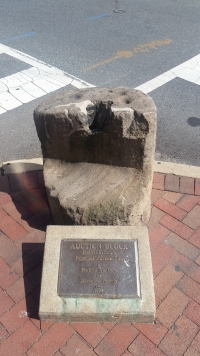 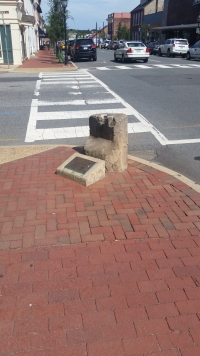 Councilor Charlie Frye raised the topic of relocating the Slave Auction Block at the City Council meeting of August 22, 2017, immediately following the “Unite the Right” rally in Charlottesville, Virginia. His proposal was for City Council to consider removing the block at its meeting in late September.

The City Council engaged the community through a public forum at James Monroe High School on Saturday, September 23, 2017, which was attended by approximately 100 people. Council also engaged the community through an online survey, in which approximately 600 people participated. Input was gathered on two options on the future of the slave auction block - for it to remain in place option A, or for it to be removed, option B. See summary here.

On September 26, 2017 Council voted to keep the slave block at its current location, by adopting option A, and to focus on better telling a more complete history of Fredericksburg. Councilor Frye was the only dissenting vote on the motion for the auction block to “stay.”  After this vote, City Council asked the International Coalition of Sites of Conscience  (ICSC) to assist in leading the next steps.

The International Coalition of Sites of Conscience led Phase 1 sessions were held during April and May 2018 with 140 individuals participating in small focus group settings. Staff from the International Coalition of Sites of Conscience gathered the stories that the community is currently telling about African American History and the slave auction block and how community members felt about those stories. The Phase 1 public report (PDF) details major themes extracted from the interviews and focus groups.

Community Collaboration Brochure (PDF) - mailed to every household in 22401 in early July 2018 informing residents of the upcoming community discussions.

Community collaboration continued in Phase 2 with a focus more specifically on the slave auction block through a series of public brainstorming sessions. Round 1 occurred on August 23 and 24 with several sessions at The Walker-Grant Center, at 210 Ferdinand Street. These sessions focused on reviewing the findings from the Phase 1 report (PDF) and what the reinterpretation of the slave auction block may look like based on these findings.

Round 2 discussions occurred on September 24 and 25 with several sessions at Walker Grant Center. These sessions focused on a design and signage conversation and review of concepts.

Phase 3 discussions occurred on October 23 and 24, November 13 and 14 and December 12 and 13 with all meetings occurring at the downtown Fredericksburg Library at 1201 Caroline Street. Topics were the following for October: Telling the Whole Story; for November: Creating Reflection and Connecting Past to Present; and for December: Education and Next Steps. These discussions delved deeper into topics that were heard during the first two phases including ways in which people talk about all facets of our history.

The Phase 3 Final Report was released on March 13, 2019 at a special meeting of Council.

On May 14, 2019, Council accepted the final ISCS Report, and requested that the Memorials Advisory Commission be tasked to work to tell a more complete City story (which includes a review of City related tourism printed/online material, scripts, signage and to make recommendations as to how the story is told moving forward at Charles and Williams Streets).   Community groups such as the NAACP, NPS, HFFI, UMW, Museum Council, City staff, among others, will be included as Council takes steps to put the ICSC recommendations into place.

Mr. Frye placed the proposal to remove the auction block back before City Council on June 11, 2019. This time, City Council voted 6 to 1 to approve the relocation from its current location at the corner of William and Charles Streets to the Fredericksburg Area Museum. Council members directed the City Manager to return with an action plan in July. The Fredericksburg Area Museum agreed to accept the slave auction block, including coordinating logistics and planning interpretation. The Memorials Advisory Commission began working though materials delivered to them at their meeting on June 5, 2019.Their work is likely to take several years to accomplish. Read the news release: City Council Moves Forward on Auction Block Preservation, Interpretation.

The Architectural Review Board (ARB) received an application for a Certificate of Appropriateness to relocate the Slave Auction Block from its original site to the Fredericksburg Area Museum on July 22, 2019. The ARB initially considered the application in a public hearing on August 12, 2019. At that time, the Board did not take action due to concerns over the procedure for an application predicated on a vote of action by the City Council.

At the September 9, 2019 meeting of the Architectural Review Board, the City Attorney requested a work session with the ARB to continue discussion and seek consultation on the proposed action. The work session was held on September 23 and, at that time, the City Attorney gave a brief presentation providing background on the City Council’s process since 2017, including the extensive community outreach conducted in partnership with the International Coalition of Sites of Conscience, and a number of considerations for the ARB. A thorough discussion was held regarding Board members’ individual views on the matter, the relevant criteria contained in the City Code, and possible courses of action.

At the October 14, 2019 ARB meeting, a motion to deny the relocation was made, but failed with a vote of two in favor, one opposed, three abstentions and one disqualification under COIA. No other motion or vote took place, so the ARB took no action on the application. Public comment was received at all four meetings of the ARB that included this topic. City Code §72-23.1(C)(5) states that the ARB shall act within 90 days of the official submission of the application. As no action was taken, the application was transmitted to the City Council for a decision on appeal.

City Council approved the final certificate of appropriateness and final loan agreement on November 12, 2019. Read the COA for Relocation of the Slave Auction Block, the Plan for Relocation and the Loan Agreement to the Fredericksburg Area Museum. See the adopted Resolution 19-100. 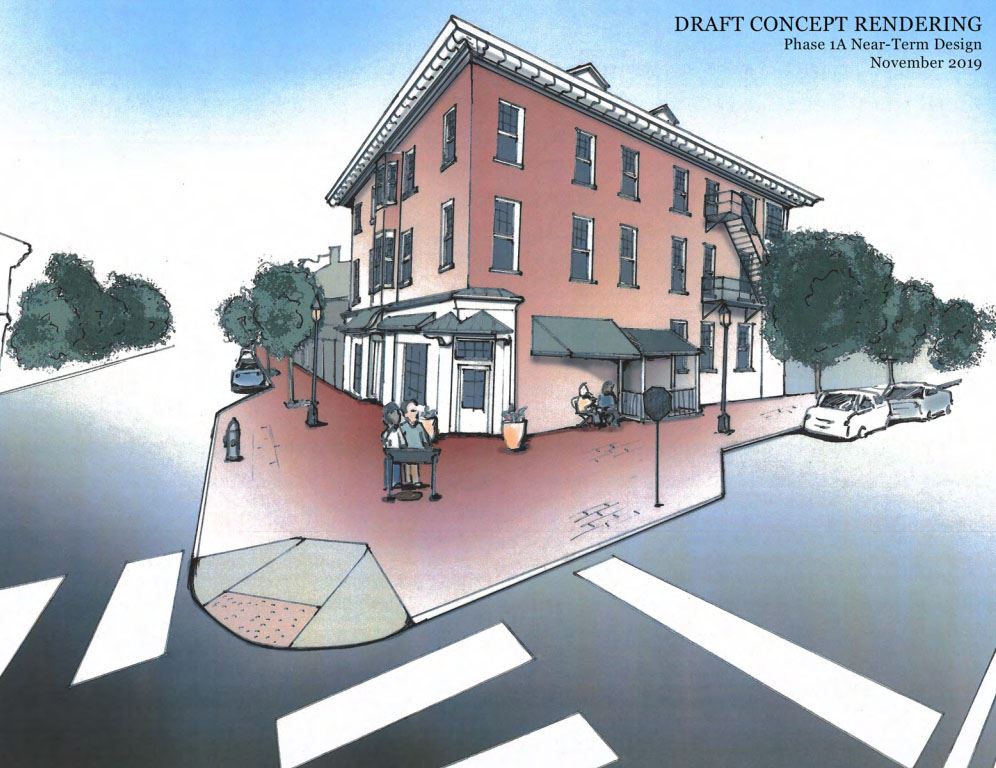 E.D. Cole Building, L.L.C. and Local Holdings, L.L.C. filed a petition in the Fredericksburg Circuit Court on December 10, 2019, appealing City Council’s November 12, 2019 adoption of Resolution 19-100, “Granting a Certificate of Appropriateness for the Relocation of the Slave Auction Block to the Fredericksburg Area Museum.” The filing of the petition stayed the effect of the Resolution, effectively blocking the City’s plans to remove the slave auction block from the corner of Charles and William Streets until the case can be resolved through the courts. Read the news release: Appeal Filed Against Moving the Slave Auction Block.

The City Council filed an “Answer” generally denying erroneous allegations in the Petition, and a “Motion for Summary Judgment,” (see also Brief in Support of Motion for Summary Judgement) which asks the Circuit Court to decide the matter on the basis of the public record and controlling law. The Motion for Summary Judgment argues that ARB decisions may be appealed to City Council, and “final decisions” of the City Council may be appealed to Circuit Court. Petitioners relied on one subsection of City Code (§72-23.1(D)(3)), but they either overlooked or ignored a following subsection (§72-23.1(F)(1)), which grants City Council authority to hear and decide appeals of ARB decisions. See illustration of omission in this Chart of Missing Subsection (PDF). 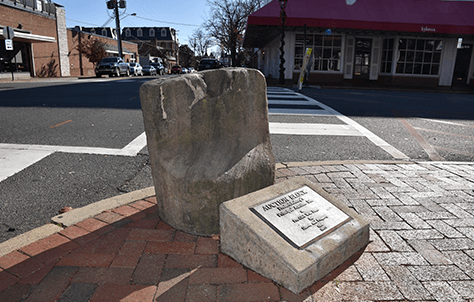 Fredericksburg Circuit Court Judge Sarah Deneke issued a letter opinion on February 14, 2020, ruling that the Fredericksburg City Council had the legal authority to order the removal of the slave auction block.

City staff had prepared a plan and were mobilized to safely remove the stone block following Judge Deneke's ruling. However, the City was notified that a petition was being filed in the Virginia Supreme Court and again halted plans for removal.

A three-judge panel of the Virginia Supreme Court rejected E.D. Cole’s petition to prohibit the City from moving the slave auction block while it (E.D. Cole and/or Local Holdings LLC) tries to appeal the Circuit Court’s dismissal of the Petition for Declaratory Judgment. Read the order here.

The auction block had become a focus of local protesters, serving as a way stop along procession routes on multiple days of demonstrations. “Move the block!” became a chant of those protesting the death of George Floyd in Minnesota. The block was spray-painted with graffiti twice over the course of the days of protest.

City staff prepared and executed a revised plan to safely remove the stone block once Phase 2 of the Governor’s Covid-19 reopening plan was set to begin. Removal of this historic artifact had remained a priority. Crews began their work early in the morning to minimize pedestrian and vehicular conflicts later in the day.  Stabilizing straps, weights, protective padding and mechanical equipment were used to lift the freed stone onto a custom-designed pallet intended to support the 1,200-pound artifact.   Dovetail Cultural Resource Group provided oversight of the removal operation. The auction block was temporarily stored and professionally cleaned to prepare it for relocation to the Fredericksburg Area Museum. Read the news release: City of Fredericksburg Proceeds with Auction Block Relocation 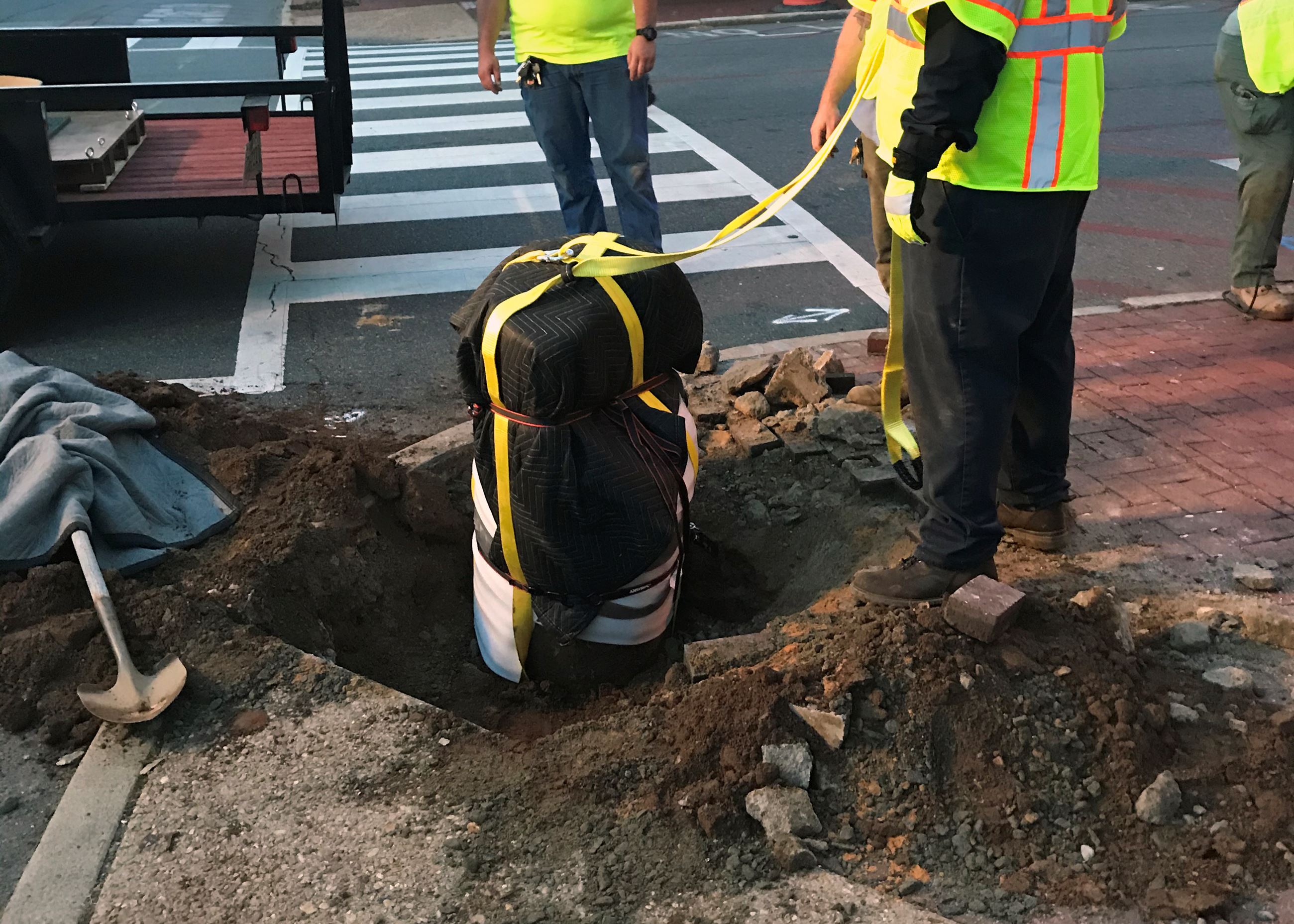 The 1,200 pound sandstone auction block was moved to the Fredericksburg Area Museum and will be featured in a temporary exhibit on African-American history.

A moment of recognition was held on October 27, 2020 at the corner of Charles and William Streets, the original site of the slave auction block. The brickwork and placement of the circular medallion were completed at the site and a brief moment of recognition took place to provide closure. Mayor Greenlaw and Vice-Mayor Frye gathered as an homage of respect, with the purpose of reflecting as a City organization and how the City has honored its commitment to the community. Phase 1 has been completed, as reported in the Plan for Relocation to City Council on November 12, 2019.  Important next steps continue to advance through the City’s Racial Equity Plan development and implementation.

Read the news release: City of Fredericksburg Honors the Importance of a More Inclusive History at the Former Site of the Slave Auction Block 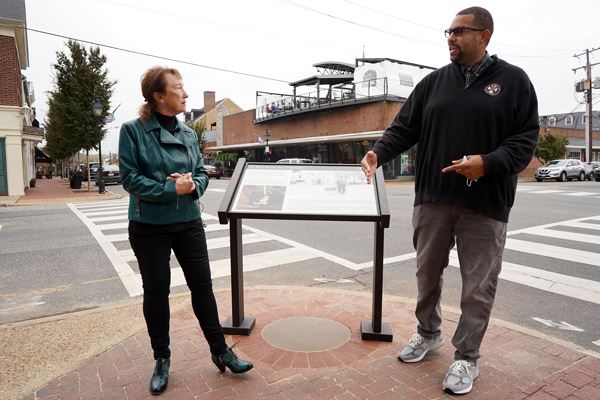 Mayor Mary Katherine Greenlaw and Vice-Mayor Charlie Frye at the corner of William and Charles Streets on October 27, 2020.